I recently ran across an article on Quartz about why open-plan offices are bad, and I felt I had to respond.

We went open-plan about a year and a half ago, and our results have been overwhelmingly positive. However, the Quartz article cites some real studies which back up their position; we must be doing something right which other open-plan offices haven’t worked out yet.

The first thing we did right we did by accident. Our original office layout called for medium-to-small corner desks for everyone. Thanks to an ordering snafu, what showed up were largish corner desks. This mistake cost us about six work-stations, but the benefits have been fantastic. We do have our minimalists, who hide their PC under the desk and refuse to allow anything beyond a keyboard, mouse, screen, and phone to take up even short-term residence on their desk, but we also have our clutter-bugs (I’m one of those) who end up with a million things strewn about. I have enough space to keep my clutter without impacting my neighbour, which is great for both our stress levels. There is no bumping of chairs. I can squeeze three people into my corner without annoying my neighbour. Space reduces inter-personal friction, and our desk purchasing snafu saved us from too little space and too much friction.

Those of you who are used to cubicles will be wondering what I mean by “impacting my neighbour” – surely we at least have a cubicle to ourselves? Nope. Our office layout looks something like this: 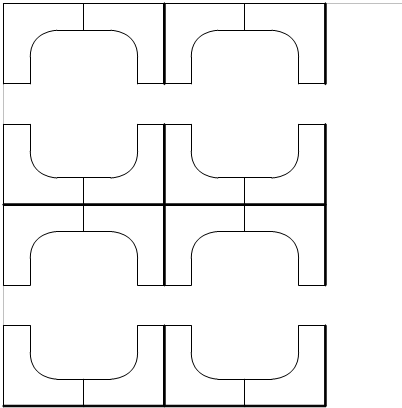 That’s sixteen desks, arranged in groups of four. This runs counter to the traditional wisdom that your cubicles should be set up with an “officey” feel. In fact, our layout is unusual enough that I had to draw it myself – Google Image Search turned up lots of layout diagrams for private cubicles, and a few with a twin- or triple-share design, but nothing which put four desks together like this. The thick lines are partitions between cubicles: they are a little over eye-height, but the top third is glass, so you can see your colleagues in other cubicles without having to stand up. The top and left sides of the diagram are the sides of the building, with plenty of big windows and sun-shades which can be pulled down. Below the bottom of this diagram are more desks, and to the right is an open space (further right again is the kitchen). We generally put teams together: my team has the bottom-right cubicle in the diagram.

Before you object that it may well be fine for my industry, but some people need periods of uninterrupted focus to get things done, let me tell you what we do: we’re an engineering firm. We’re not all software engineers (we have environmental engineers, chemical engineers, and other sorts), but my team is all software. We found, actually, that it was the communicators who did less well in the open-plan environment, and quickly migrated to one of the few private offices we kept. If you spend a lot of time on the phone, background noise is annoying. It’s annoying for me, too, but there’s an easy solution open to me: headphones. Some of us don’t seem bothered by general office noise, but the rest of us use varying degrees of noise-cancellation, from simple earbuds to high-end Bose active-noise-cancelling headphones. I used big over-the-ear ‘phones with lots of foam for a while, but I recently switched to Sony active-noise-cancelling on-ear ‘phones (which cost about sixty bucks), and now I can’t even hear my desk phone when it rings. My usual choice of music is Enya: it’s calming and has no distracting lyrics.

So far, I’ve just talked about why our open-plan office isn’t bad, which ignores one very big thing which surprised a lot of us. Our open-plan office is good. There was plenty of opposition to the change; I myself was deeply skeptical, and spent some time wondering if “Will I get my own office?” is an appropriate question to ask when you’re interviewing for a new position. I expected open-plan to be something we could put up with, but our experience has been much better than that.

Perhaps the best thing, for me, has been the lack of interruptions. In an office, people knock on your door, or they page your phone, or they come in and just start talking: people become interruptions on their terms. In an open-plan office like ours, the headphones-on signal has become a pretty strong indicator of “I’m busy”, and people are much more likely to come back another time, or flick you an email instead. A closed door was always a negative message: “I don’t have time for my colleagues”. We used it reluctantly, and imagined people rolling their eyes as they walked past. Headphones have become a very positive signal: “I’m getting stuff done”. In fact, if I spend too long without my headphones on I start to wonder if people might think I’m slacking off.

Another great benefit has been the general office atmosphere. There are a lot more “good-mornings” as we all get in to work. There are the occasional office pow-wows, particularly on Friday afternoons when the mood is light, we’re winding down for the week, and we sit around with beer or champagne in hand chatting about our week. Team meetings have often been praised for having the advantage of putting a bunch of smart, creative people in one room – ideas will happen. We put a bunch of smart, creative people in one room, with Google and all their usual developent tools in front of them and a beverage in hand, and we do it when the mood hits. It’s infrequent; don’t imagine for a moment that we while away our days, chatting and drinking. It’s not even weekly: there are times when most of us are busy, and it gets to 6 pm on a Friday and I notice that nobody brought ’round beers, and half the office has quietly slipped away as they finished their day.

Another benefit is that the open-plan layout is much more egalitarian, and much more accepting. New staff feel like they’re part of the team much more quickly. Status-conveying corner offices are gone. It’s much easier to change desks on a whim, because you won’t suffer from people going to the wrong office until they’re used to the change. Lack of an appropriate office is no longer a barrier to promotion: we used to have a small number of cubicles in the centre of the office. You were seen as a junior until a proper office opened up and you got to leave the cubes. If the offices were all full, we couldn’t hire an experienced candidate and put them in with the juniors. Going open-plan has made some problems we used to have vanish.

I said before that the best thing has been the lack of interruptions, but it hasn’t, really. It’s been the inter-personal dialog. Not counting weekends, I spend more waking hours at work than at home, and I’m a big believer in feeling just as at-home at work as you do at home (exception: the dress code!) Switching to an open-plan layout has transformed the office from a little room where I go to work, into a friendly, social atmosphere where I can shut out the world and just get things done, or listen to my friends and colleagues while I perform less-concentration-intensive tasks.

I understand the concerns of the anti-open-planners. They feel like they’ll lose their privacy. They feel like they’ll be constantly interrupted. Worst of all, they feel like they’ve been commoditised – they used to have their own office, now they’re just another plot in a cube-farm. This feeling is partly the fault of pop-culture: it has always idolised big, well-appointed, private offices, and the cube-farm has been mocked in Dilbert so often we’ve come to believe the stereotype. The simple fact is, however, that moving from private offices to an open-plan layout hasn’t commoditised us in the least; if anything, it’s made each of us see our colleagues more as individuals, and less as office doors.

There are certainly things which can go wrong in open-plan offices, but I think, in general, that they’re not short-comings of the open-plan environment; they’re short-comings of the organisation, which closed doors used to hide. People shouting across the room or taking things from your desk is not an open-plan problem; it’s a respect problem. Disagreement on the A/C temperature? Did you honestly have individual thermostats in your offices? I never have. In an open-plan office there will probably be hot-spots and cold-spots – if you don’t like your micro-climate, see if you can swap with someone who has a location that’s more comfortable for you. I love sitting directly under an A/C outlet to stay as chilly as possible.

One thing which has been important to making our open-plan transition a success has been meeting space. We have several small rooms and one large boardroom for breaking out for meetings. One-on-one meetings with managers can still happen in private. Larger meetings or teleconferences can be held without adding to the general office noise. The boardroom has a conference phone and a computer with a huge screen and wireless keyboard and mouse. The smaller meeting rooms have desk phones and power-points for laptops. We have an office wireless network which lets people find a quiet corner with a laptop if they need to.

Ultimately, I’m not trying to say that open-plan is better than private offices. They each have their advantages. My aim is to dispel the myth that you should never put knowledge workers in an open-plan office. The Dilbert stereotype is a false one. I imagine lots of people have had negative experiences – but I’m convinced that most of those negative experiences have been the result of open-plan-done-wrong.

Here’s my recipe for open-plan success:

If you follow those steps, you are on the right track to an open-plan layout which will be good for productivity and make your employees generally happier.