[Image description: Three panel comic.
First panel: Scene of a bottom desk with a PC on it. There is a cat lying across the keyboard.
Second panel: A man is standing in front of a desk, his arm bandaged. There is a second man sitting behind the desk. There is a plaque on the desk reading ‘Architect’.
Man: I tried to move it. It went badly.
Architect: Just use the hotdesk until he moves by himself.
Third panel: The man is looking at the hotdesk. There is a water heater leaking steam and a small camp-fire in the room, and a red-hot pipe running along the wall near the desk. The whole room is tinged red.
Man: Oh.] 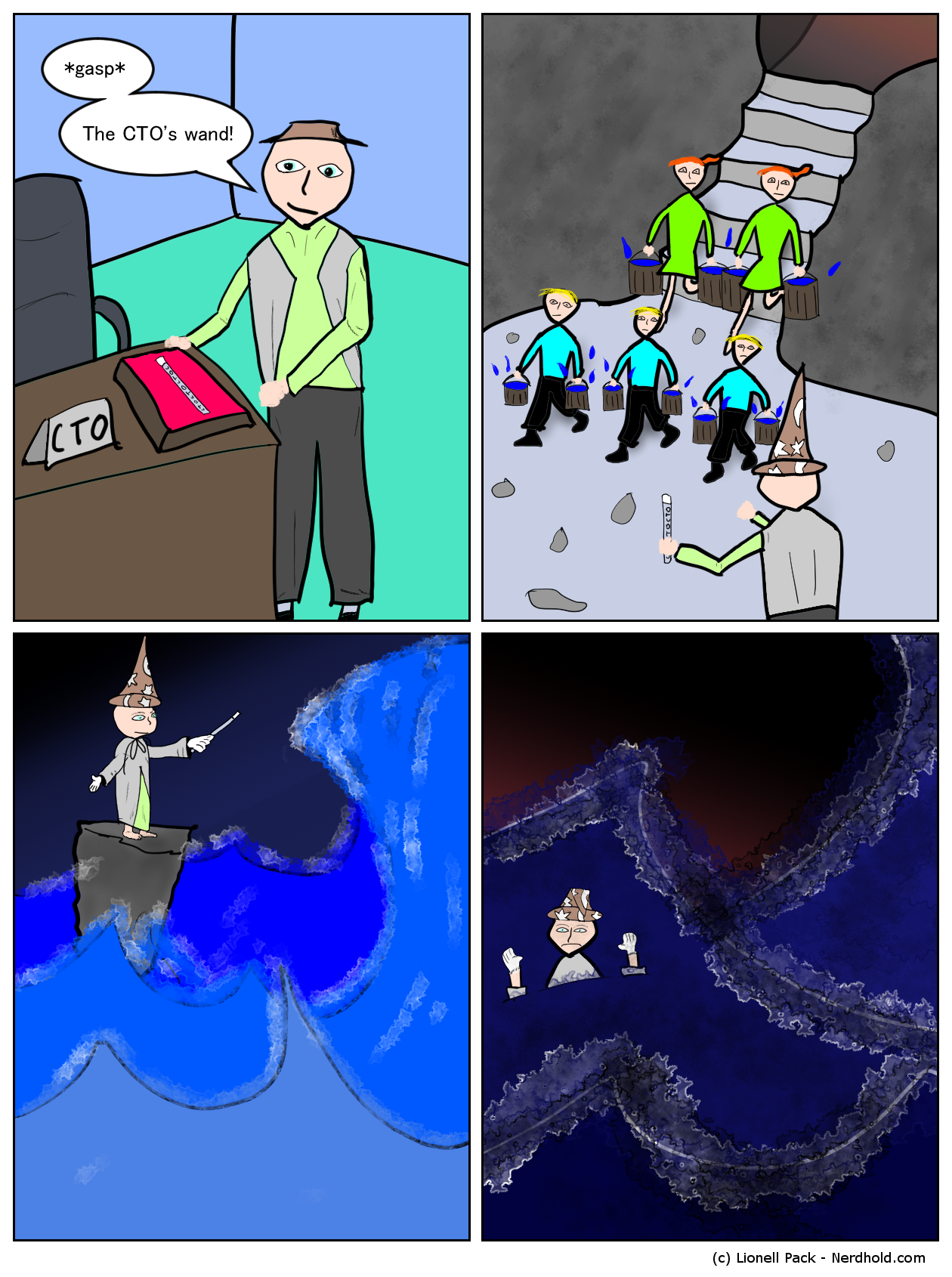 [Image description: Four panel comic.
First panel: Man standing beside a desk. There is a plaque reading ‘CTO’ and a box containing a wand.
Man: *gasp* The CTO’s wand!
Second panel: The man is brandishing the wand, and his hat has become a wizard’s hat. There are three clones of a different man carrying buckets filled with water, and two clones of a woman also carrying water-filled buckets.
Third panel: The man is standing on a rock amid waves. He is brandishing the wand and his clothes have become wizard’s robes.
Fourth panel: Similar to the third scene. The waves are darker, the rock is gone, and the man is immersed in the water. His wizard’s hat looks rather forlorn.] 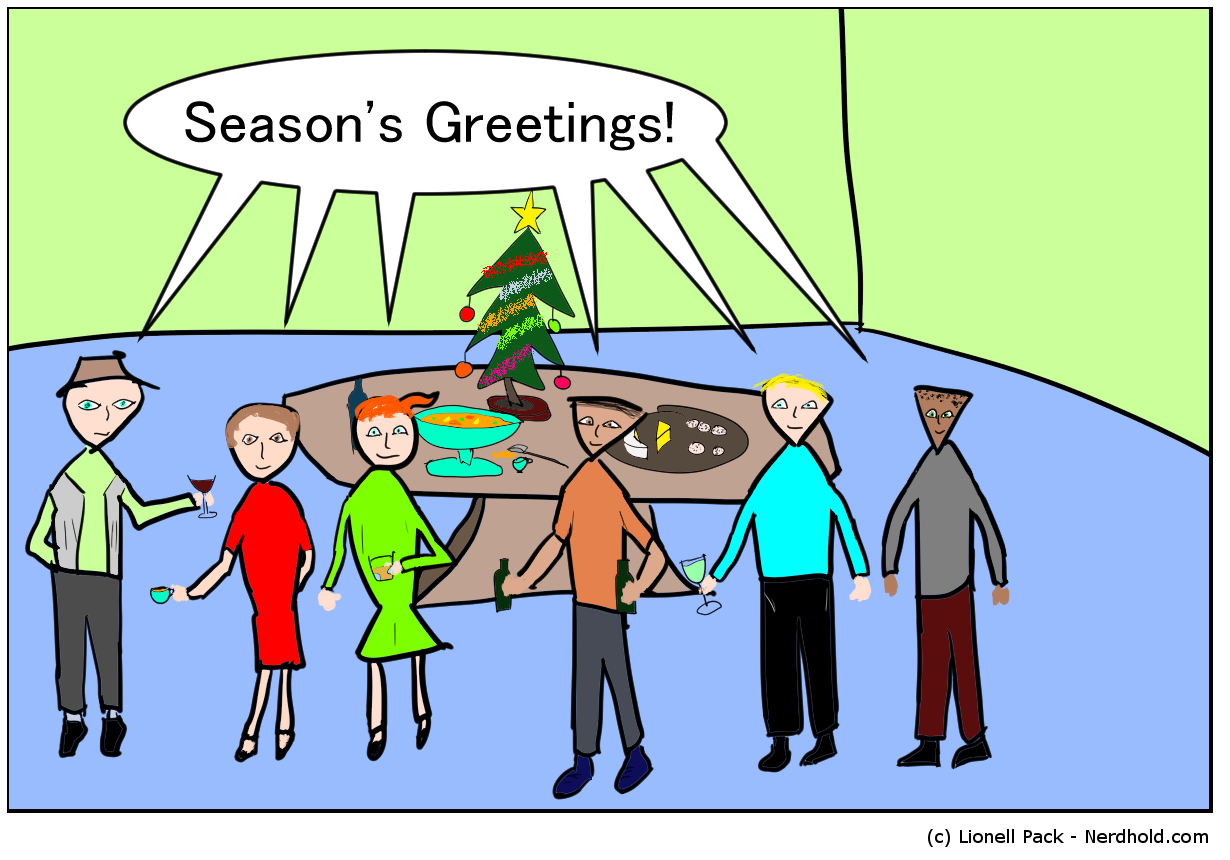 [Image description: Single panel comic.
Six colleagues are standing in front of a table covered with drinks, snacks, and a small Christmas tree. They are shouting “Season’s Greetings!” in unison.] 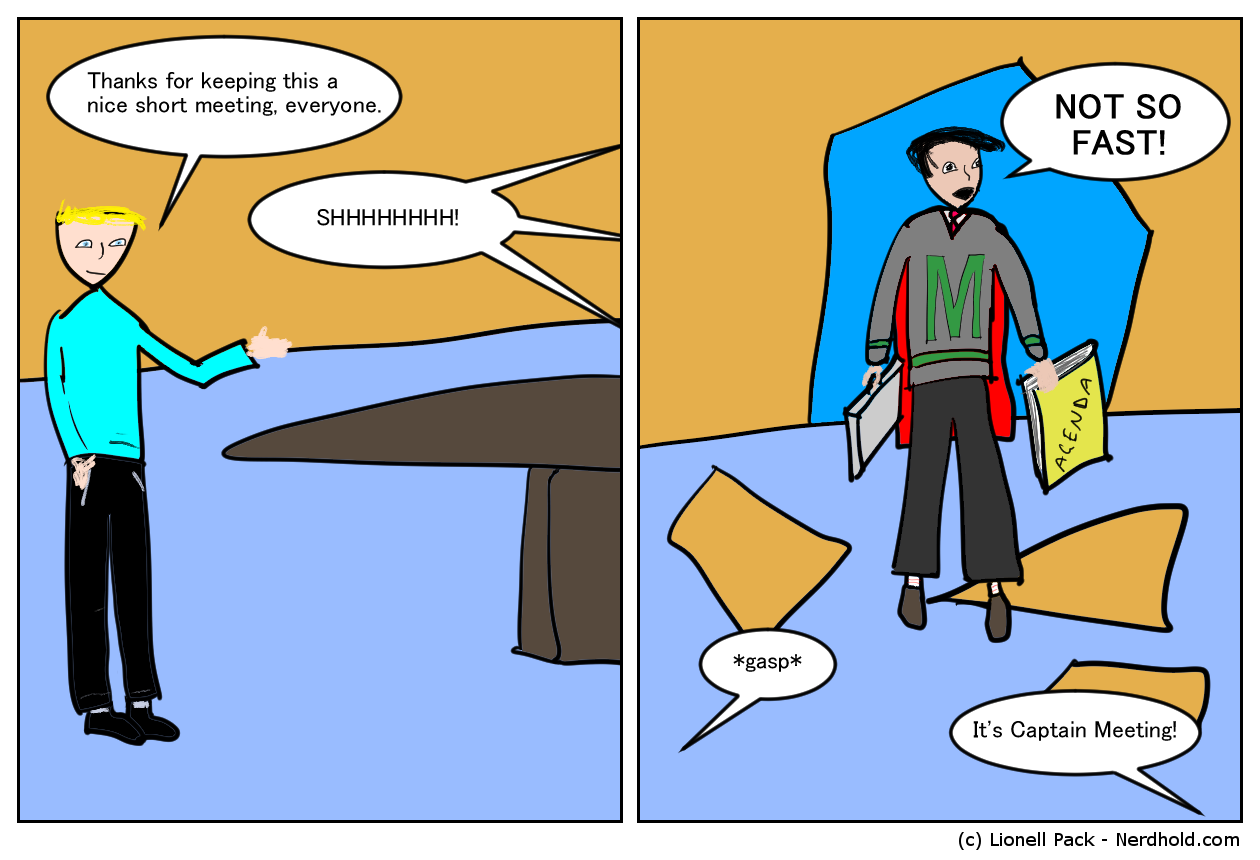 [Image description: Two-panel comic.
First panel: A man standing in front of a meeting table.
Man: Thanks for keeping this a nice short meeting, everyone.
Several people, off-panel: SHHHHHHHH!
Second panel: Another man with a capital M on his jumper has burst through the wall. Pieces of the wall are strewn about. He has a briefcase in one hand, and a thick folder labelled AGENDA in the other.
Newly-entered man: NOT SO FAST!
Person off-panel: *gasp*
Other person off-panel: It’s Captain Meeting!

[Image description: Three-panel comic.
First panel: A man is leaning against the side of a double-decker desk. A woman is reclining on the floor in front of a PC on the bottom desk.
Man: I heard you asked for a bottom desk. What gives?
Woman: I hate heights. Anyway, the safety course sounds like a pain.
Second panel: Three people are sitting on extremely high chairs, including the man from the first scene – he is falling off. An instructor stands in front of them.
Instructor: Welcome to your Working at Heights Certification Course. Pay attention! Anyone who fails is back to a bottom desk.
Third panel: The woman from the first panel is sitting on a high chair in front of a top desk. The man is standing beside the desk, looking forlorn.
Woman: I hate you.] 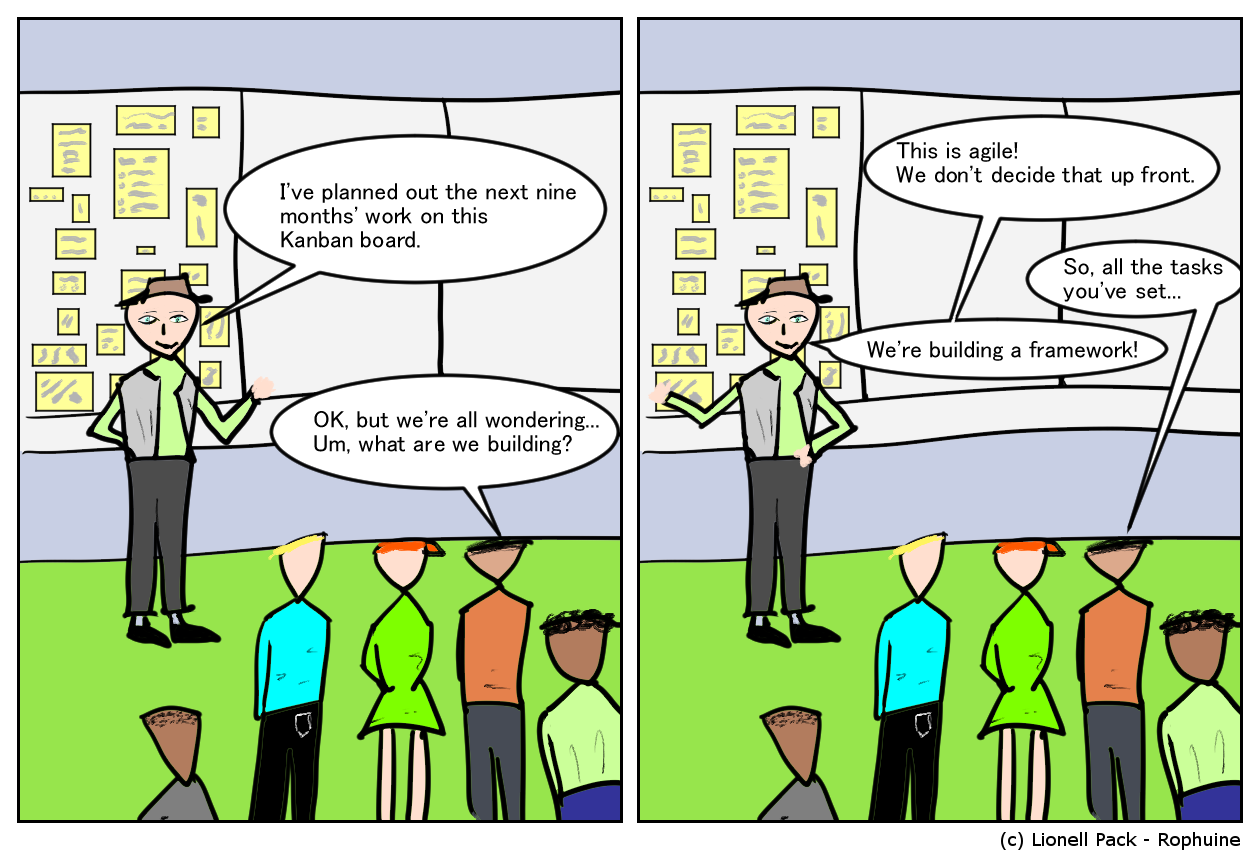 [Image description: Two comic panels.
First panel: A team leader standing in front of a whiteboard divided in three. Yellow sticky notes cover the first third, while the other two are empty. Five developers stand facing him.
Leader: I’ve planned out the next nine months’ work on this Kanban board.
Developer: OK, but we’re all wondering… Um, what are we building?
Second panel: The same scene.
Leader: This is agile! We don’t decide that up front.
Developer: So, all the tasks you’ve set…
Leader: We’re building a framework!] 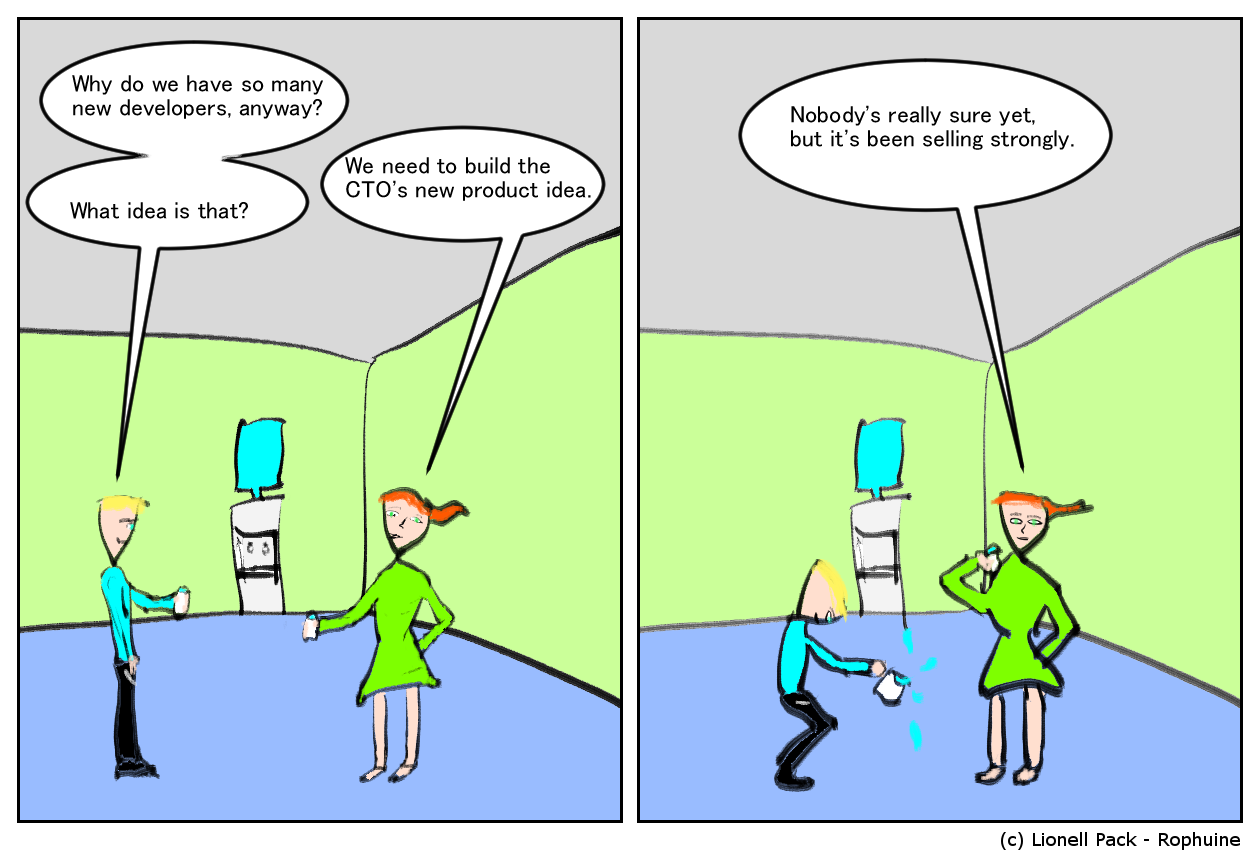 [Image description: Two comic panels.
First panel: A man in a blue shirt and a women in a green dress, standing by a water cooler. Both are holding cups of water.
Man: Why do we have so many new developers, anyway?
Woman: We need to build the CTO’s new product idea.
Man: What idea is that?
Second panel: The same scene, except the man has just dropped his cup.
Woman: Nobody’s really sure yet, but it’s been selling strongly.] 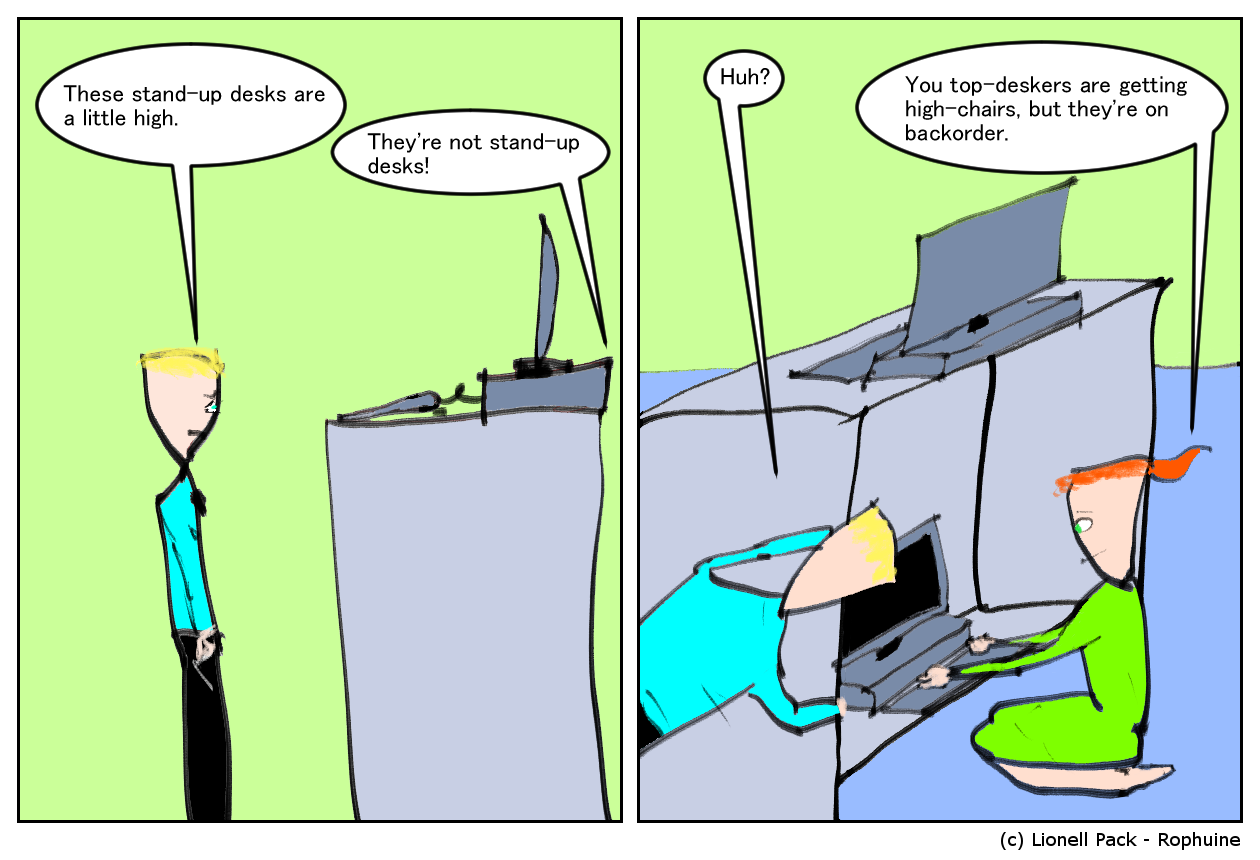 [Image description: 2 comic panels.
First panel: Man in blue shirt and black pants standing in front of a desk with a PC on it. The keyboard is at eye level.
Man: “These stand-up desks are a little high.”
Person off-panel: “They’re not stand-up desks!”
Second panel: Man peering around desk. There is a red-haired women kneeling at a floor-level desk built inside and under the first desk.
Man: “Huh?”
Woman: “You top-deskers are getting high-chairs, but they’re on backorder.”]