Sorry for the unannounced hiatus. Nerdhold is back! I will be posting comics intermittently. 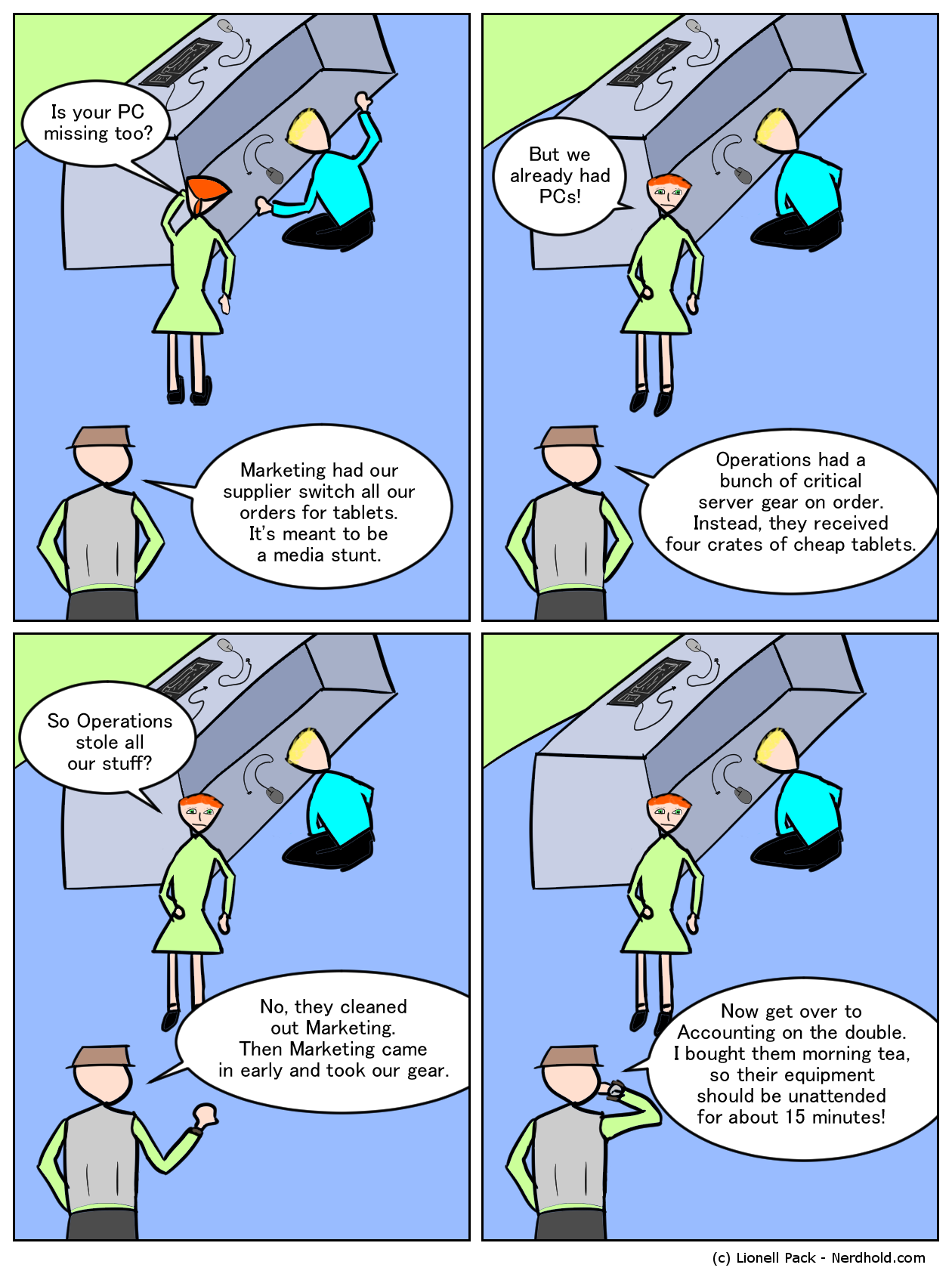 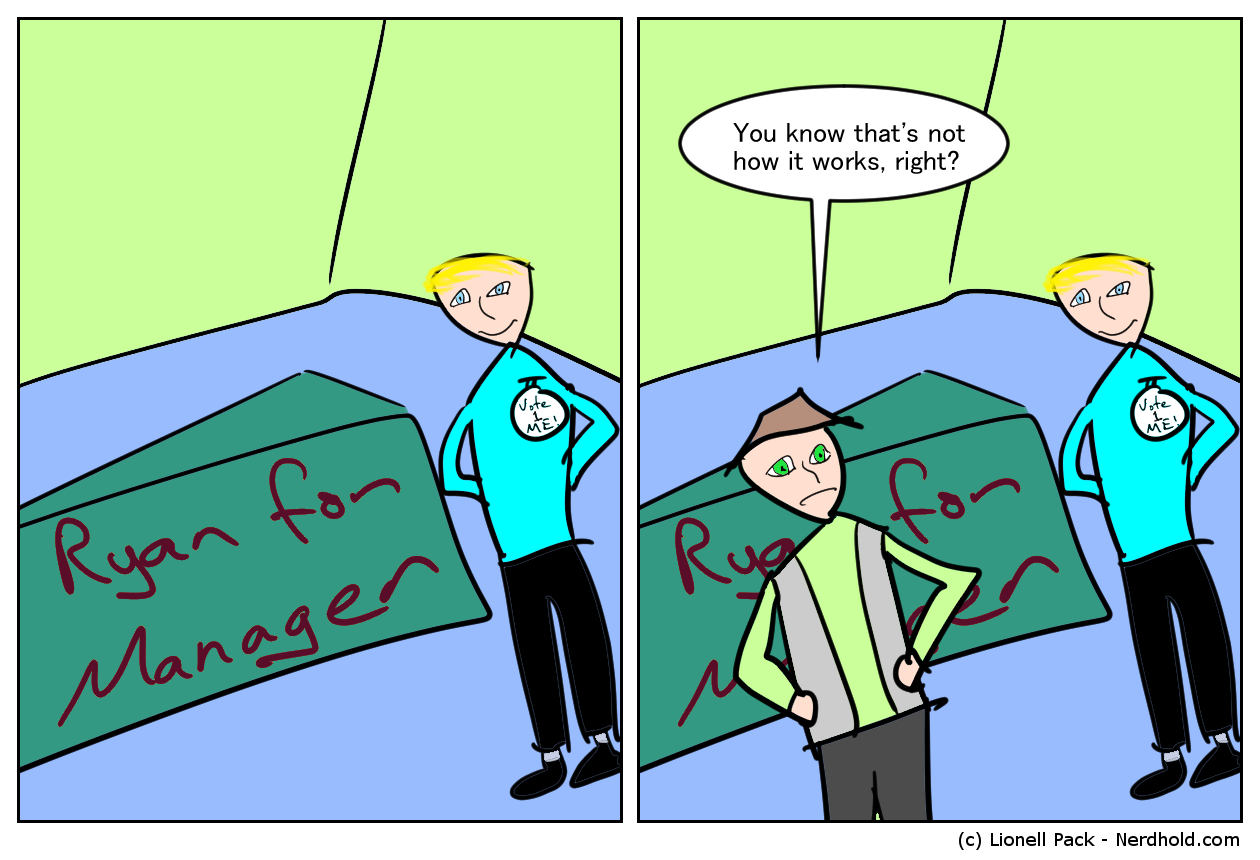 [Image description: Two panel comic.First panel: Ryan, standing in front of a sign which says 'Ryan for Manager', wearing a pin saying 'Vote 1 ME!'
Second panel: Same scene, the Architect is standing in front of the sign and saying "You know that's not how it works, right?"]

[Image description: Three panel comic.
First panel: Girl with bright red hair in a pony-tail, flying a spaceship, pursuing and shooting at another spaceship.
Second panel: Same girl, holding a lightsaber and deflecting a blaster shot. There is a man in white space armour on the ground with a blaster burn on his chest, and a spaceship in the background.
Third panel: Same girl, back in the office, asleep on her bottom desk. The architect is saying "I want the new developer in my office in five minutes." Another developer whispers to a colleague, "I guess we better wake her up?"] 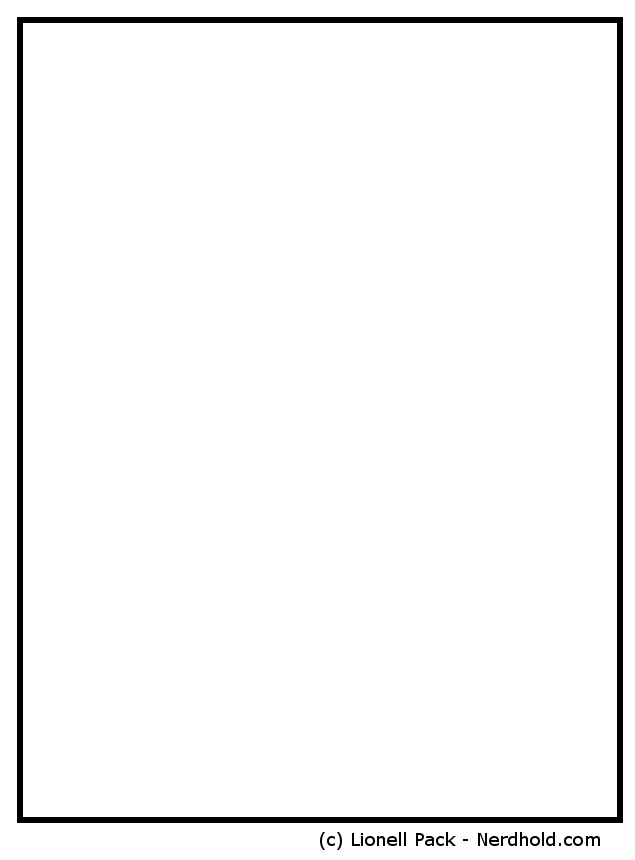 I was going to post a #JeSuisCharlie comic today (I even drew one) – but I thought a bit about what that would mean, and I decided to post some words instead. I was a word-smith long before I started pretending I could draw, and I think I’ll do a better job this way.
I deplore what happened. Let me get that out right now. I feel sad for the lives lost. I am appalled at the act of violence that was committed. I offer no buts.
I’m not Charlie, though. I don’t know much about the magazine, but I try to make my humour and art friendly things, and I understand that they do not. I’m glad there are people out there doing what they do, and I’m even gladder that there are other people out there who are staunch and vocal critics of what they do.
I’ve heard this shooting labeled an act of terrorism, though, and it wasn’t.
Terrorism is something which aims to strike fear into the hearts of the average person. It is terrifying because it is random and highly visible. This act was highly visible, but it was not random. If you want to avoid being shot in this type of attack, all you need to do is not work for a magazine which publishes material which makes fun of Islam. That, too, is an awful thing.
The simple fact is that this was an act of vigilante justice, committed by people who believe that blasphemy is a crime which should be punished by the government. The government failed, in their eyes, and so they took ‘justice’ into their own hands.
Of course, it’s not really that simple. Power structures and imperialism and war all colour this topic. This was also an act of war. France is not a nation friendly to Muslims, and Charlie Hebdo was a target with tremendous symbolic value.
The real problem is that the Western world is very hostile towards Islam, and the even worse problem is that they have a reason to be.
The simple solution, of course, is that Islam needs to abandon its teachings that apostasy and blasphemy and other such things are crimes. And, in concert with that, the Western world needs to abandon its enmity towards Islam.
It seems unresolvable. The Western world will not change while even a small fraction of the Islamic world holds onto these values: if there’s one thing the Western world has learned, it’s that even a handful of people can cause tremendous damage. Islam cannot change overnight, and it will never compromise with Western values while it feels so attacked by those same values. If there’s one thing Islam has learned, it’s that it cannot afford to cave in to the Western powers which hate it.
I don’t know how we fix this, but I’m pretty sure that me posting a #JeSuisCharlie comic wouldn’t help.